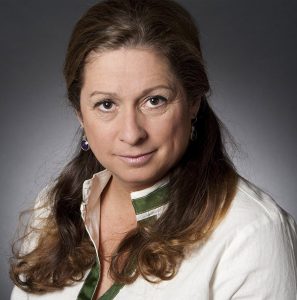 Abigail E. Disney is an award-winning filmmaker, philanthropist, the CEO and president of Fork Films, and a mother of four. An active supporter of peacebuilding, she is passionate about advancing women’s roles in the public sphere. Abigail’s films and series focus on social issues and spotlight extraordinary people who speak truth to power.

Having grown up in a family of filmmakers, Abigail turned to documentaries when inspired to tell the story of a brave group of women who used nonviolent protests and sex strikes to bring an end to Liberia’s long civil war. She and renowned filmmaker Gini Reticker made the widely acclaimed PRAY THE DEVIL BACK TO HELL, which is broadly credited with highlighting the achievements of Leymah Gbowee, who received a Nobel Peace Prize in 2011. Abigail and Gini went on to found Fork Films, which is known for making and funding high profile, critically acclaimed documentaries that are seen on PBS, Netflix, HBO and other major outlets.

In addition to producing original films, Fork Films awards grants to non-fiction films that promote peacebuilding, human rights and social justice with a particular emphasis on projects with women behind or in front of the camera. As of June 2017, Fork Films has awarded over $4 million to 90 documentaries including CAMERAPERSON, TRAPPED, 1971, THE MASK YOU LIVE IN, CITIZEN KOCH, HOT GIRLS WANTED, THE INVISIBLE WAR, and SUN COME UP. Fork Films grantees have premiered at top tier film festivals, won major awards and moved the needle on important social issues.

In 2012, along with Pamela Hogan and Gini Reticker, Abigail created and executive produced the first-of-its-kind series for PBS, WOMEN, WAR & PEACE. The five-part series looked at women in modern war as active agents for peace and positive change makers in their communities. It garnered the Overseas Press Club’s Edward R. Murrow Award, a Gracie Award, and a Television Academy Honor. Season II of the series is currently in production.

In 2009, Abigail founded Peace is Loud, a nonprofit that inspires action through media and live events that spotlight women leaders on the frontline of peacebuilding worldwide.

Abigail’s directorial debut, THE ARMOR OF LIGHT, co-directed by Kathleen Hughes, premiered at the 2015 Tribeca Film Festival and was a Peabody Award finalist. The film follows Reverend Rob Schenck, an Evangelical minister, and Lucy McBath, the mother of a teenage shooting victim, who ask, is it possible to be both pro-gun and pro-life? Peace is Loud led the outreach and engagement campaign for THE ARMOR OF LIGHT to restore a moral, ethical, and theological framework to the conversation about gun violence in America. The campaign has initiated and supported dialogue with faith leaders and communities around the country, reaching out beyond the documentary film community to target dozens of conservative evangelical influencers.

Abigail also recently executive produced the Fork Films original production THE TRIALS OF SPRING, a major multiplatform project that tells the stories of nine women on the front lines of change in the MENA region.

Abigail is the recipient of numerous awards including an honor by the International Women’s Media Foundation for advancing women’s issues and peace initiatives; The International Advocate for Peace Award, presented by Cardozo Law School; and the Epic Award presented by The White House Project.

This website uses cookies to improve your experience while you navigate through the website. Out of these, the cookies that are categorized as necessary are stored on your browser as they are essential for the working of basic functionalities of the website. We also use third-party cookies that help us analyze and understand how you use this website. These cookies will be stored in your browser only with your consent. You also have the option to opt-out of these cookies. But opting out of some of these cookies may affect your browsing experience.
Necessary Always Enabled
Necessary cookies are absolutely essential for the website to function properly. This category only includes cookies that ensures basic functionalities and security features of the website. These cookies do not store any personal information.
Non-necessary
Any cookies that may not be particularly necessary for the website to function and is used specifically to collect user personal data via analytics, ads, other embedded contents are termed as non-necessary cookies. It is mandatory to procure user consent prior to running these cookies on your website.
SAVE & ACCEPT